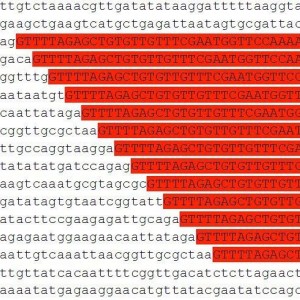 Imagine you’re a virus — but not just any virus. You’re a bacteriophage, or a virus that specifically attacks bacteria.

You operate by invading a bacterium and hijacking its cellular machinery to overwhelm and devour it while producing more copies of yourself. You grow more powerful by moving on to an adjacent bacterium and devouring it too. Soon, you’ll conquer the world!

Or you might, if not for one problem: Many bacteria have an adaptive defense system that can recognize foreign DNA and use a special molecular scalpel to cleave it from their cells and destroy it.

Moreover, this adaptive defense mechanism performs double duty as a sort of genetic tape recording that remembers previous phage attacks and how to respond to them, providing immunization against future phage attacks of a similar type.

You, virus, have been foiled by a tool known as CRISPR, a microbial adaptive immune system that has been co-opted into a cut-and-replace gene-editing system currently taking the scientific world by storm. CRISPR has potential applications for crop production, agricultural biotechnology and a myriad of other important processes and industries. It promises to be a Swiss army knife for genome editing in life forms ranging from bacteria to humans.

While researchers across the globe are quickly jumping on the bullet train that is the CRISPR bandwagon, a pioneering NC State professor has spent more than a decade helping move the bandwagon forward, authoring dozens of refereed journal articles and chalking up around 20 patents along the way.