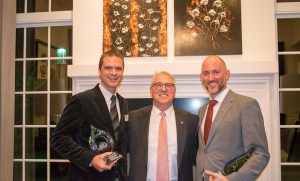 NC State held its 27th Celebration of Innovation and Entrepreneurship to recognize the outstanding achievements of its faculty inventors over the last year. With over 500 products to market and over 125 startups launched, NC State continues to contribute to the economy of North Carolina and the nation as a whole. In 2016, the Office of Technology Commercialization and New Ventures worked with NC State faculty to launch 12 startup companies, execute 164 commercialization agreements, issue 65 patents, generate $3.8 million in licensing revenue, and select 7 Chancellor’s Innovation Fund projects.

In addition to honoring inventors that received a patent or launched a startup company in 2016, Chancellor Randy Woodson presented the Innovator of the Year and Dr. John S. Risley Entrepreneur of the Year awards to Dr. Michael Escuti and Dr. Rodolphe Barrangou, respectively.